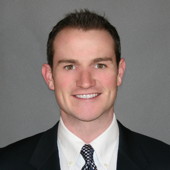 Robb is a Cedar Rapids, Iowa native where he attended Cedar Rapids Washington High school. While attending, he was involved in a number of sports & activities. More notably, his sophomore year, he won the Best Male Dancer award as voted upon by his peers for his involvement in show choir.  He was also a member of the swim team all 4 years, earning academic all-conference honors & was the team co-captain his senior season.  Following high school, Robb attended Miami University in Oxford, Ohio where he received a BS degree in Finance from the Richard T. Farmer School of Business.  Robb joined MidAmerican Aerospace in July 2006 where he is a member of the sales team, focusing on airframe & engine parts.  His friends & family are of the utmost importance to him including his 4 siblings. He & his better half Molly stay pretty active playing sand volleyball, cycling, & snowboarding.  They participate in the VisionWalk (Cincinnati) each year which contributes to the Foundation Fighting Blindness.  He also understands there’s more to life than being really, really, really ridiculously good looking.