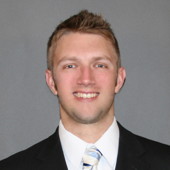 Jon is a Cedar Rapids native who obtained a BA in Communication Studies while attending Luther College in Decorah, Iowa. Aside from his studies, he also earned four varsity letters as a relief pitcher/spot starter for the Norse baseball team, serving as co-captain his senior season. Following his college experience, Jonathan spent a year in New Zealand bartending and enjoying the Kiwi lifestyle.

Jon and his better half Amanda welcomed their son Oliver to the world in April 2014, and are enjoying the thrills and excitement of parenthood. Jon is a huge sports fan and avid Iowa Hawkeyes supporter. He enjoys staying active and competing in recreational sports with his mates and wanted to make special note that his teams win more often than not (this detail remains unconfirmed). Jonathan enjoys music of all kinds, and is sometimes mistaken for possessing above average talent on the drums and piano. In his free time he enjoys reading, writing, and playing with the family dog Cooper.