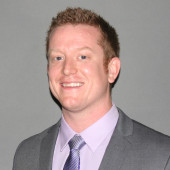 Daniel was born in Iowa City, but spent much of his youth traveling the US and Europe with his parents and two sisters. They went to places like Denmark, Sweden, Germany and Czech Republic. His favorite city to live in was Prague. He graduated from Marion High school in 2001 and then spent time in the Air Force as a munitions apprentice at Hill AFB in Utah.

After his honorable discharge, he married his longtime friend Dawn. They moved to Spokane Washington where he spent 6 years working on his bachelor’s degree from Moody Aviation. He graduated in 2012 with a Bachelor of Science in Missionary Aviation Technology which included an A&P certificate and commercial pilot’s certificate.

After school, he moved back to Iowa with his wife and 4 kids. He spent time working for a part 61 flight school in Marion as a mechanic and commercial pilot before joining the MidAmerican Aerospace team in February of 2013.

In the summer following graduation, he also founded Paraclete Aviation, a non-profit youth organization, where he enjoys spending time mentoring youth and teaching them about aviation. In his spare time, Daniel enjoys traveling, flying, motorcycle riding, and, of course, spending time with his wife and young children.